First and foremost, our thoughts and prayers are with the people of Orlando and LGBT communities throughout Florida and everywhere. May you find peace and healing in the coming weeks and months.

The tragic events of early Sunday morning have become an all too common occurrence in the United States; Columbine, Aurora, Sandy Hook, Virginia Tech, Fort Hood, San Bernardino and many, many others. The facts of the Orlando shooting will become more clear by the day but due to the work of many hardworking newspaper journalists in Florida, we already know (and did know within hours) a significant amount about the shooter. In particular, his alleged motivations and how he was a licensed security guard (and able to purchase firearms) despite being on the FBI terror watch list as recently as 2014. These are important facts as we try to learn from this tragedy. Newspaper journalists were undoubtedly the first on the story and they will likely be the ones that will do the most in-depth reporting of the impact of the tragedy on the City of Orlando and the LGBT community. It’s what they do.

As always, newspapers play an important role in shaping the public’s consciousness following a traumatic and horrific event (wish I could say unprecedented here.) Along these lines, the front pages of the New York Daily News and New York Post have become somewhat predictable…but this is a certain kind of ”journalism” that overtly plays to the prejudices of readers. 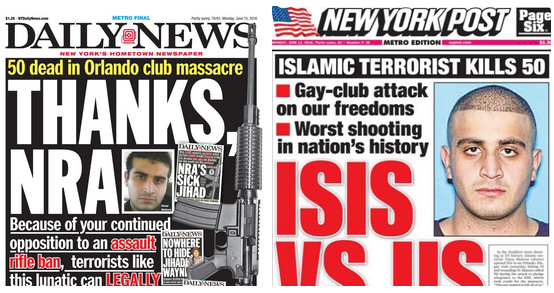 It’s difficult to say what exactly is the ”correct” chord to strike in the wake of such an immense tragedy. We thought it best to show how Florida papers -those closest to the tragedy- responded to the Orlando shooting.

Even in Florida, a few newsrooms went the somewhat sensational route:

Generally speaking, however, most of the headlines were more reflective of the basic facts and scale of the terror:

The Tampa Bay Times and the Villages Daily News have two of the more unique and creative front page treatments:

Perhaps most fitting, the Orlando Sentinel has what could easily be describe as the most moving headline and imagery. #OrlandoUnited