Did I get your attention?

Conventional wisdom, at least from not long ago, would say that older Americans are not that ”digital.” In 2014, Pew Research showed that people 65+ were still about 18% less likely to use a mobile phone and they’re only about half as likely to go online and/or have broadband access. In other words, people 65+ are kind of like the ”settlers” in the latest (and very funny) series of DIRECTV commercials.

For sure, older Americans are still doing some things at a higher rate than the generations coming up behind them; like watching TV (when the show airs rather than time shifting), using the landline to make calls, ”going online” using their desktop PC and reading newspapers (the kind that will occasionally leave black ink on your fingers.) However, if our first-quarter call data is any indication, the conventional wisdom about older Americans and newspaper readers may be quickly becoming more conventional than wisdom. 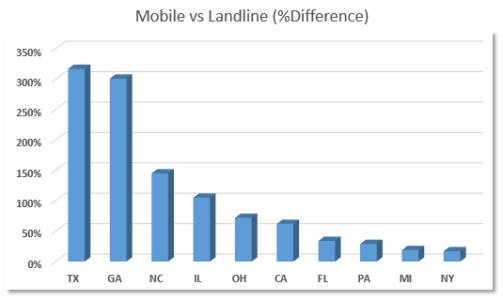 Our chart shows the percentage difference between the number of mobile calls versus landline calls; meaning in Texas, for example, there were over 300% more mobile calls than landline calls during the first three months of this year. New York State, at the other end of this scale, had a small difference between the number of mobile and landline calls. Of course, without weighing the types of publications and the specific advertisers that drove the calls, we’re not suggesting anyone jump to conclusions. Although, the advertiser mix is likely similar across these states. Also, for this comparison we only looked at the ten highest population states. The total sample, for all ten states, is tens of thousands of qualified calls.

The point is that with so much change in media devices and technology and so much change in our habits over the past several years, it’s likely we don’t know as much about ”seniors,” ”millennials,” ”adults 25-54” or any demographic set for that matter. If newspaper and print readers are reaching for their mobile phones first (often at a much higher rate than landlines) then it’s time to update the popular view of newspaper/print readers…if it’s possible.